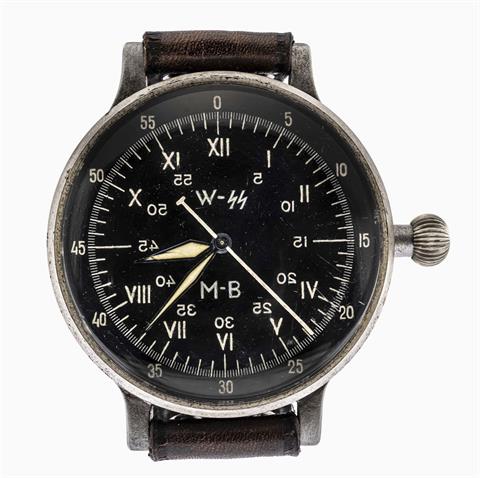 !!! EXTREME !!! rare - 22 pieces - observation watch from Lange and Söhne on request of the Waffen-SS, probably for the artillery and their research on V-weapons in Penemünde which was directly under Himmler, Führungshauptamt, Amt IX Berlin Wilmersdorf, Extreme size of 65mm, height of 21mm, brass gray matted, movement Cal. 48 Ankerchronometer with gold regulating screws Lange & Söhne, movement and case number identical No. 215803 from February 29, 1944, movement runs exactly, stop mechanism when pulling the crown, with special dial to order, black with roman. Luminous numerals, minuterie inside and outside, designation W-SS and at the 6 o'clock position M-B, instead of the III and the IX extended graduation marks, inner minuterie mirror-inverted executed for the use in a sighting device of sextants, where through a semi-transparent mirror sun, horizon and several scales as well as the dial was observed, with expertise of Mr. Reichel Director of the Glashütte Clock Museum dated 05.April 2002, shipping book extract from 29.2.1944, brown leather strap in extra length to wear over the suit was probably after old model optically very well supplemented, this and further information also to read at Dr. Konrad Knirim '' Volume I: Military watches 150 years time measurement in the German military